On Friday, Zach and I (Oma tagged along too) delivered treats to Adam's first grade class. In case you didn't know, Adam's favorite color is orange, so for the second year in a row, we've made sugar cookies with orange frosting. We always top them with sprinkles. The class sang Happy Birthday, and Zach made himself at home, pulling up a chair by Adam's desk. Zach already knew four children in Adam's class (two boys from soccer, one boy from basketball and one girl who lives in our neighborhood).

Saturday, the boys woke up early (6:10 am) and were excited to get on with the day. Grammy and Grandpa drove down from Kansas City and once Oma, Papa and Grandma Agnes arrived, we sat down for Adam's special birthday lunch. He chose to go through the Wendy's drive-thru, and those who didn't want hamburgers, french fries and chicken nuggets made turkey and ham sandwiches.

Then came the most exciting part: opening presents. Adam received the game Battleship, a subscription to National Geographic Kids, money, MythBusters science kit, a remote control car and a Lego tow truck (you didn't think there would NOT be any Lego's, did you?). Then cake and ice cream. Adam chose white cake, white frosting topped with orange and blue sprinkles. We also served a choice of vanilla ice cream, or rainbow sherbet. 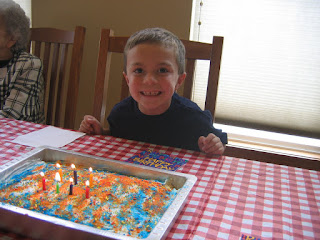 They boys spent the afternoon putting the Lego's together, while the remote control car was charging. Scott played a game of Battleship, and we also prepared the rocket from the science kit for take off. We ate pizza for dinner, and then headed to the Wichita Flight Festival. The boys enjoyed looking at the all planes and the twilight air show. One plane included a girl who was strapped on the top. But the best part was not the planes, but the outhouse and low rider truck, both equipped with a jet engine. The outhouse zoomed up and down the runway and at one point the door flew open to reveal the driver, sitting on the "seat." The truck blew out white smoke, performed "donuts" while fire exploded out the back, and then drove down the runaway at jet engine speed...which is really fast!

On Sunday, we took the rocket for a spin. It was a kit where you mix vinegar and baking powder. It worked pretty good...blasting high into the sky. 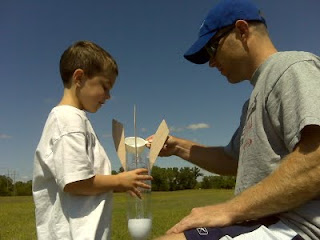 Then we tried out the remote control car on the dirt path. It wasn't as fast as the cars we have seen adults playing with, but we still had fun.

My Life via DVD

I recently received my life on DVD. No, not a made-for-TV movie, although I think Ashley Judd would portray me quite well. I sent my photos from the 1970s, 80s and early 90s to scanmyphotos.com. Lots of people worried that these precious moments caught on camera would get lost in the mail, or somehow get destroyed. it was possible, but I decided to risk it.

I found out about scanmyphotos.com from my dad, who sent me a link to a New York Times article more than a year ago. Scanmyphotos.com touted they can scan 1,000 photographs for $50+tax and shipping. I originally thought that I might have a hard time coming up with 1,000 photos. Not exactly. I am now up to more than 4,000 photographs (of course, this includes about 1,000 from Scott's stash) and I'm not done yet.

The company does provide a unlimited photos box (fits up to 2,000 standard size photos), that includes priority mail shipping, for $125. I realized I needed 3 boxes, which is pricey. But since following them on twitter, I noticed they were running two promotions, saving me $150. Don't think that scanning nearly 5,000 photos is cheap, it's not. But the alternative (me scanning them by hand) was not an option, and I wanted all of my pre-digital memories available with just a mouse click. Memories like these... 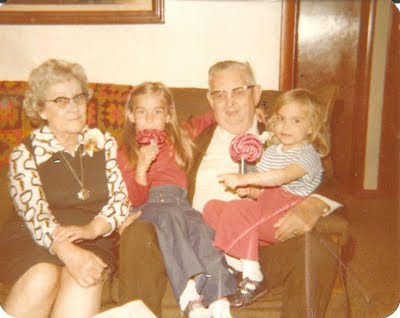 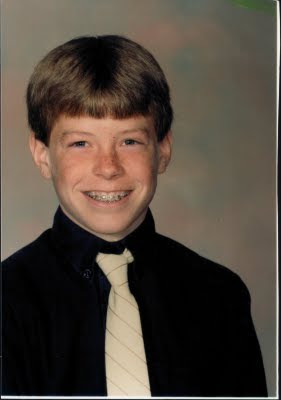 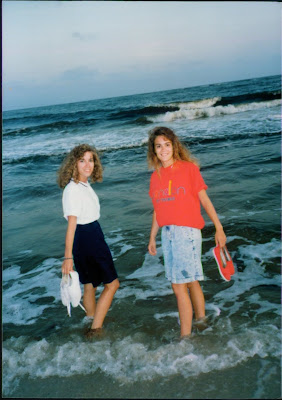 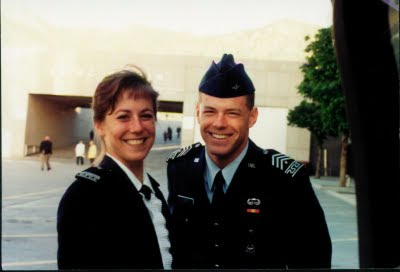 The first picture Scott and I ever took together, 1995 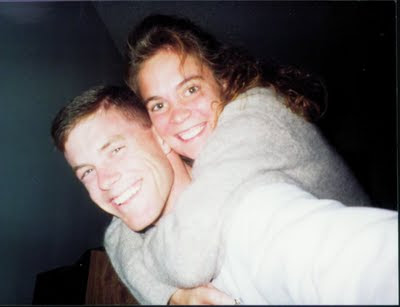 Actual photographs will fade over time and become unrecognizable, but these will live on digitally as a one of thousands of jpegs stored on our external hard drive.

Scanmyphotos.com provides precise instructions on how to prepare your photos, even a video. I won't go through them, but it was one of the most difficult parts of the process. There was an additional cost for optional services like photos that were scanned in groups, rotated right side up, and if you wanted a signature verification.

Another time consuming part of this was removing the photos from albums. The worst culprits were photos from the 1970s and early 1980s. Some of the photos were stuck like super glue in the albums, and despite my desperate attempts, would not budge.

I had two boxes ready to mail, but at the last minute decided to send only one, just in case. I mailed my box and it was returned to me with all the original photos and a DVD with 1,800 scanned photos in less than seven days. I have already mailed my second box.

The First Day of School

The First Day of School. I write this with capital letters because it has become quite the event. The day started out quite dark (literally) as clouds and thunderstorms moved in. 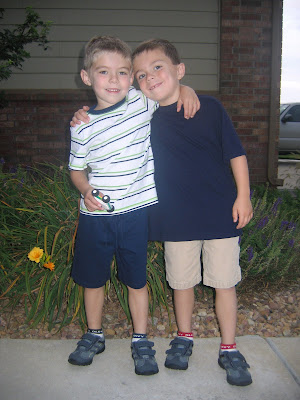 The boys waited at the bus stop (about three houses down from ours) with about eight other kids and their parents. 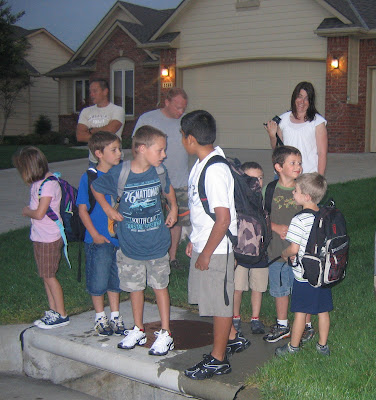 A mere minutes after they were safely on their way to school, it started raining. And not just a sprinkle or steady rain. No, it was a torrential downpour. But like all the other parents (or paparazzi, as Scott said), we braved the rain and wind and drove to school so we could get pictures of the kids getting off the bus, and walk them to class. It was raining and blowing so hard that wind blew my umbrella inside out and my cute sandals were soaked before I even made it across the street.

We waited inside the foyer of the school, along with the other paparazzi. But this group was not waiting for Brangelina, TomKat, Jen or George. We all compared notes..."is this your oldest?" "what teacher do they have?"

Because of the weather, instead of waiting until all the buses had arrived to let the students off all at once, the students would be let off as their buses arrived at the school. The teachers made a tunnel with their umbrella's to help keep the children dry on their way in. The parent at the front called out the bus number, to let the paparazzi know when they should move near the door with their camera.

"What's the number? I can't hear the number!" one frantic photographer shouted from the back.

Finally Adam and Zach's bus arrived. It was one of the last, and although school was supposed to start at 8:48, kids were still streaming into the school at 9am. 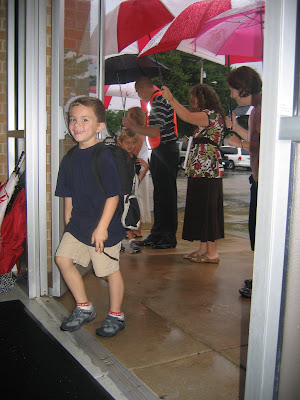 We walked Zach to class. 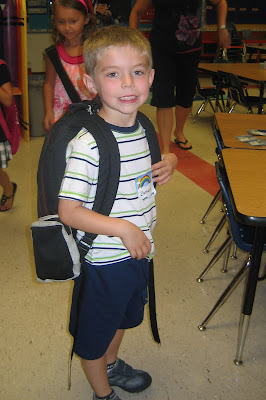 Adam said he didn't need any help finding his class, but I did manage to sneak in a take this picture. 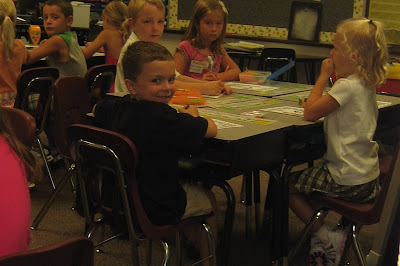 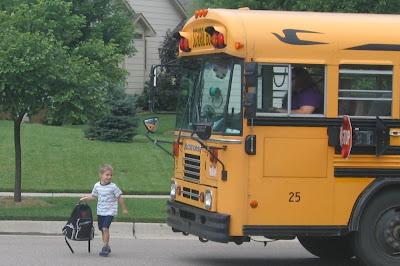 Apparently, it was such an exciting day, that Zach had to take a nap in the afternoon. No kidding...he WANTED to lay down. He slept for about 45 minutes.

After Charleston, SC, we were headed to another southern state, Alabama. Scott had been "non-volunteered" to earn a Master's in Criminal Justice from the University of Alabama-Birmingham.

We rented a condo in Vestavia Hills. Vestavia Hills was considered a pretty nice area, but we lived right on the edge….so you could say we lived in the ‘hood. We had a great neighbor, Caroline, who invited us over for dinner, and watched Brittany and Samantha when we were on vacation. Our neighbor on the other side was a little different. We called her “the trash lady” because her condo was full of trash. Her car was full of trash. And we saw her maybe three times during the 18 months that we lived there.

The condo was a two story, two bedroom, two bath place with a very small kitchen. In fact, I don’t think you could have the refrigerator door and oven door open at the same time, and two was definitely a crowd in the small space. Rent was $585 per month. As you can see, the kitchen was tight! 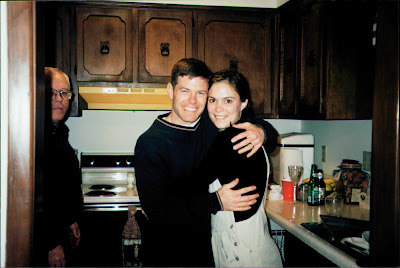 We had a great deck.Yes, a deck. Our condo overlooked a small stream and wooded area, and the previous owners had made the deck bigger. The foliage was so green, and it was always shady. The cats liked to go out there and just see what was going on.

Scott went to school two or three nights a week, and spent his free time playing golf, deep sea fishing, hunting and just goofing off. This is where he acquired his taste for Scotch and learned the secret to his grilling technique from our friend Steven Gardner. I worked full-time as PR/Marketing Director at Camp Fire Boys and Girls (now Camp Fire USA).

We also lived within walking distance of one of the best Mexican restaurants ever…Sol Azteca. Ask Scott’s cousin, Jackie, about our night there…I’m pretty sure all she will tell you is that we drank a lot of margaritas. What happens in Birmingham, stays in Birmingham!

I'm not sure when this picture was taken, but it was taken in Birmingham, sometime in 1999. 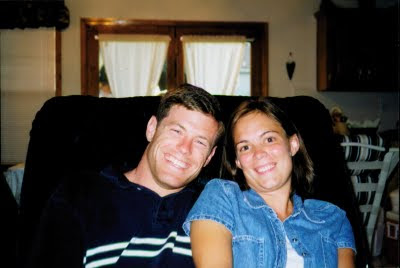 Next up: Dayton, OH