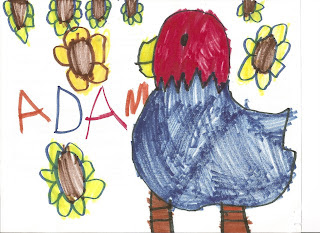 I've included some of the boys' art this time (I haven't taken any new pictures). I'm a bit concerned about who has been filling Adam's head with images of Jayhawks...as you can see from his picture! He does know who he should root for between KU and K-State, though, so I'm not too worried about it. Zach’s picture is a “picture of our house with our fireplace on in a storm.”

Zach says he wants to be a firefighter when he grows up, and Adam switches between soldier, scientist and artist, depending on what we've been doing or talking about that day. When we talk 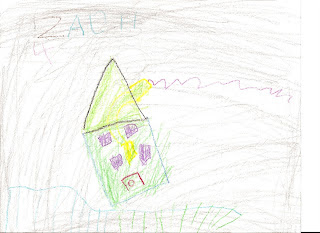 about space, planets, fish in the ocean, etc, he wants to be a scientist so he will know all the answers to his questions. When we've had a day of coloring, he wants to be an artist. And when they've been playing with their transformers or wearing camouflage, it's the solder he's more interested in!

We’ve been pretty busy since my last post. Our Christmas lasted through Jan. 6 this year as we made a trip up to KC to see Scott’s sister and her fiancé and Scott’s parents. January was a blur as I’ve been pretty busy at work, and the boys started their winter sports. Zach is taking his 2nd tumbling class, an activity that is right up his alley. He gets to climb, hang, and jump! There is even a foam pit that they let the kids run and jump into...I think that is the highlight. Adam is playing basketball and like it a lot. Watching four and five year olds play basketball is pretty amusing. Luckily the ref’s do not call them on a lot of things…it helps keep the game moving.

We made a little overnight trip to Hutchinson and stayed at the Grand Prairie hotel, which has an indoor space-themed waterpark. The boys had a blast...they thought it was so cool, not only the water park, but the fact that we got to spend the night in a hotel! The pool had slides you could go down on inner tubes, fountains, a lazy river and a pool with basketball goals so you could play basketball in the water! The slides were the highlight, but the boys were not tall enough to go by themselves, so Scott and I had to make trip up the stairs with them. I can't tell you how many times we went down, but we finally had to tell them that we had to "rest."

Right now Adam and Zach are playing Hullabaloo, a gift from Grammy and Grandpa at Christmas. I told them I was Hullabalooed-out, because we play it almost everyday. It changes between Uno (a gift from Aunt Lisa and Jason) and Hullabaloo, so if you come to our house, you'll be asked to play one of those games.
Posted by Susan at 9:42 AM 1 comment: