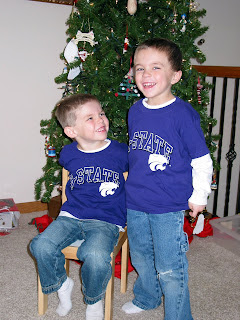 Happy New Year everyone! Hope everyone had a great holiday season. The boys enjoyed playing with their cousins and looking at all the Christmas lights. Santa is still a bit scary to them--Adam and Zach wouldn't even look at him when we saw him at the mall.

The Saturday before Christmas we had a huge blizzard…white out conditions. You couldn’t even see the road when driving. So we had the bright idea to go bowling! Actually, we had already planned to go bowling with some friends at a bowling alley on the east side of Wichita (which usually takes about 20 minutes to get to). We decided to brave the weather and headed out. It took us about an hour and 15 minutes to get there, and then nearly two hours to get home! There were cars off the road everywhere! And if you weren’t following the cars in front of you, you had no idea where the road was. It was quite an adventure. Adam and Zach thought it was funny that Scott had to get out a bunch of times and scrape the window and windshield wipers. It’s probably not the smartest thing we have done.

We had two more episodes of snow this month. We went sledding twice and built a couple of snowmen and even a tunnel and fort. I’m ready for it to melt, but the boys keep asking when we’ll get to go sledding again. It’s been really cold here, so we’ve had cabin fever. How much longer until spring?

Zach starts tumbling this month, and Adam will be playing basketball.
Posted by Susan at 3:56 PM No comments: