We are three games into basketball season. Adam and Zach seem to enjoy it. They are on separate teams, so we always have two games on Saturday morning. This morning, I think Zach made a couple of baskets. The funniest thing about Zach is that when he gets the ball, he's so fast going down the court that he gets out of control! And he never stops moving...he's jumping, skipping, hopping, twirling or running. It's a lot of fun to watch.

Adam made four baskets, and one right as the buzzer went off. Each player has a colored wristband, and they are supposed to find the player on the other team with the same color and "guard" them during the game. Adam likes to get right in their face.

Here's a picture of the two of them today. 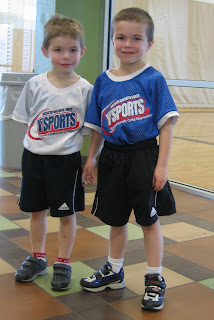 This video is of Zach at his game last week. He's the one in the red pants (not shorts), and you have to watch fast because it's pretty quick! I haven't finished the disk that Adam's games are on, so those will go up at a later date.

Now that the historic Inauguration day is winding down, for me anyway, looks the Inaugural Ball is in full swing. I heard or read somewhere that the first lady has never worn a dress that has bared her shoulders (say it isn't so!). I don't know if that is true or not. But if it is, it looks like Mrs. O is the "first" of many things.

Speaking of Mrs. O, you can follow her fashion style on the blog www.mrs-o.org. I looked at this site earlier, but now it seems to be "down." And if you didn't notice Jill Biden...she was wearing black stiletto heeled boots and a red coat. Way to loosen up the political scene.

The Inauguration was smack in the middle of my Turbokick class at the Y, so thank goodness for DVR. So I let the boys watch some of the coverage leading up to the speech (I decided that they could watch it instead of resting, just this once).

So here's a few observations from the five and six year old crowd:

As I turn it on Adam informs me that "he's already seen this show." He said they watched it in class today. I asked him what his teacher said about it and he said he didn't remember. I guess there are more important things to remember when you are in kindergarten.

Zach asked how come there were so many people there, and "Wow! Look at the GIANT TV!"

Adam asked how come those "soldiers were standing so straight."

When Aretha Franklin sang "My Country Tis of Thee", Adam piped up with "Hey! I know this song!" and proceeded to sing along. But then said that she "didn't sing it right." So much for the Queen of Soul impressing a six year old.

When they showed a shot of the crowd one of the boys asked "I wonder where Lisa and Jason are? Do you think we'll see them?" I guess they thought that since Lisa and Jason live there, that would actually BE there.

When they introduced Barack Obama, they introduced him as "Barack H. Obama." So the questions began:
"Why did they say Barack H. Obama? Is that his REAL name?"
Me: "They just included the initial of his middle name, Hussein...like Adam C. Dyer or Zachary S. Dyer"
"But why is his name Hussein?"
Me: "Well, that's what his parents named him."
"But we never say our middle names."
Me: "Well, sometimes you need to include your middle initial or your whole name."
"But his name is Barack Obama."
Me; "Yes, but it can also be Barack H. Obama."
"So why did they say the 'H'?"
So you see where this is going. So I pulled my usual "they just did" answer and left it at that.

Adam asked "What's the Vice-President's job?" I said he helps the President. Adam asked "Do what?" I said that the President has a big job and is the leader of everyone in the United States and sometimes he need help with things. So Adam said "Barack Obama is the leader? So do we have to do what he says?"
Posted by Susan at 7:55 PM No comments:

It’s a wonder any child learns the English language. I don’t remember learning it and all its idiosyncrasies, but I’m quickly finding out how difficult of a language it really is.

Both Adam and Zach are learning to read and spell. And they like to rhyme words. So we’ve had lots of conversations that start like this…"how do you spell…?" and "cat rhymes with hat." We like to change the first consonant to make a rhyming word. It’s fun.

Enough about rhyming…let’s move on to the sounds letters make, or don’t make. Most common are the silent "e" at the end of a word, and silent "k" at the beginning of a word. And why does "ph" make the same sound as "f"? And don’t get me started on "c" and "k." Can’t we just pick one, "c" OR "k"? They can work solo, but put them at the end of the word, and you’ve got a team. Zach likes to say he has a silent "k" on the end of his name. So the "c" gets all the credit for making the sound. But "c" can also take the job of "s" in certain situations, like "dice" or "city." I know there’s a rule about "c" sounding like an "s" if it comes before an "i" or "y" or something, but I’ve long forgotten the exact rule.

So what’s a five or six year old to think? Can we make it any more difficult to learn the language? I guess we all learned it, so it must not have been impossible.
Posted by Susan at 9:21 PM No comments: 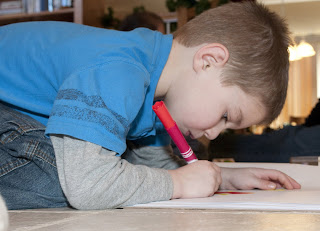 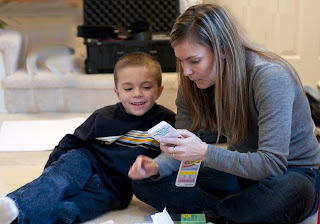 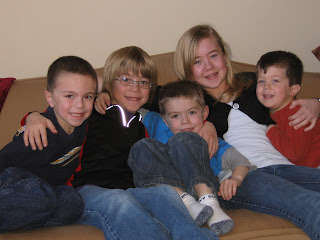 Until someone broke out the confetti (ok, shredded paper, but still) 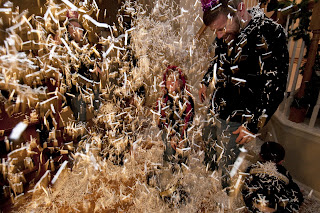 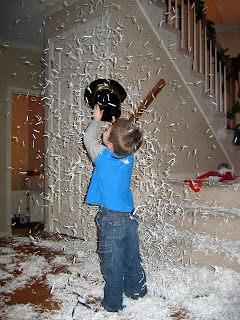 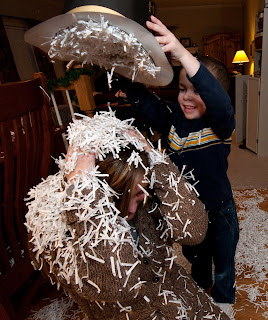 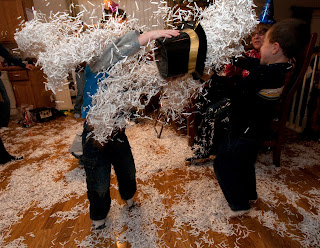 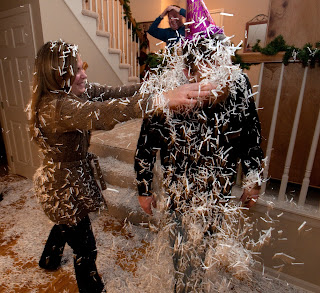 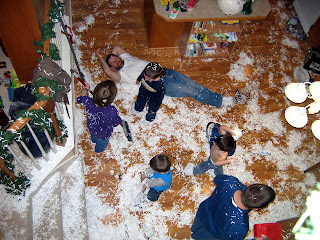 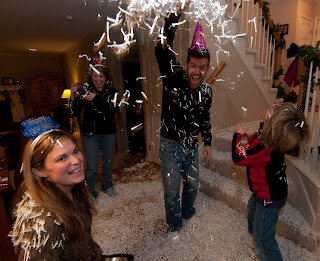