I have to get better at updating this blog. Time just gets away fr 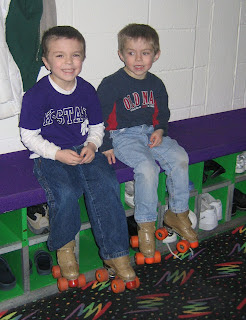 om me. We recently took the boys skating for the first time. It took about 20 minutes to go around the rink once, and they were done after that and said they didn’t want to go skating again. We played space invaders and skee ball and then called it a day.
Soccer starts next weekend. Scott is coaching again and we already know everyone on our team. Two are returning from last season, and the others are friends of ours. The boys are excited to get out on the field again…at least they SAY they are. Hopefully having all their friends on the same team won’t be a distraction!
We just finished a six-day game of Monopoly. Each day was about an hour or so of playing. Zach played on Scott’s team and Adam was the banker. They really picked up on buying property and how to count money. It’s amazing what their little brains absorb. One of Zach’s favorite things to do is "type letters’ and "make words" on my laptop. I open a Word document and he chooses a color and font and then sounds out words and types them on the screen. He knows how to backspace, make the letters ALL CAPS and start a new line by pressing enter. He thought it was so cool when I showed him the webdings font and instead of typing letters, he could type pictures! The joys of technology! 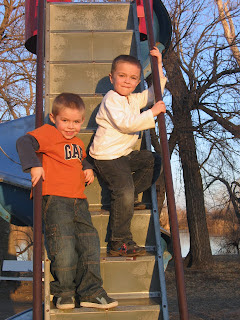 We've had a few nice days of 60-70 degree weather. This weekend Adam and Zach had lots of time to play with their friends outside. They climbed trees (our neighbor's tree who then told them they had to get down), rode bikes, played tag and hide and seek and played in the sand. We even grilled out on Sunday night. Tonight after dinner we went to Sedgwick County Park to play until the sun went down.
Posted by Susan at 9:23 PM No comments: