Adam turned 6 on Aug. 29. We took cookies to school (with orange frosting and sprinkles!) and he got to sit in the frog chair and pick out a NEW purple pencil. We had a little celebration for him at home. My sister and her family were in town and so were Scott’s parents, so we had quite a crowd. He chose chocolate cake with chocolate icing (definitely my child) and rainbow ice cream (definitely NOT my child).
Today, we had a friend party to celebrate both Adam and Zach’s birthday. We’ve always had a joint birthday party for them, because they are so close in age and have the same friends…much easier. But according to Adam, this is the last year he’s having his party with Zach. So we had 7 little friends (ages 4-8, all boys and one girl), plus cousins Katie, Jake and Matthew. We had it at the YMCA (lots of room and someone else to clean up the mess!) The boys chose a “Transformers” cake. We spent 30 minutes in the party room, and then it was off to the swimming pool. Most of the Dads stayed, so I didn’t have to get in the water.

I took Zach's training wheels off today...he wasn't sure, but after much convincing from me and Adam, he agreed. We went across the street to the neighbor's driveway and I held onto the seat. Before we made it to the next driveway, I let go and off he went. Adam even helped him, as you can see from the video. It's been a big week for us.

I totally rock! I figured out how to upload home videos from our new video camera. So here's Zach as we are waiting for Adam to get off the bus...

And Adam getting off the bus... 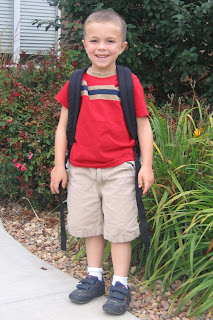 Adam started Kindgergarten today. His school has only K-1 in the building. The whole family went and we walked him to his classroom. We had already met his teacher at “meet the teacher” night on Monday. As we were walking in, Zach said “Mom, this isn’t very fun to do.”

Once Adam was in the classroom, the teacher showed him where to hang his backpack and they found his name on his cubby. She also asked him if he wanted chocolate milk or white milk for a snack. He looked at me and Scott and said “white.” I’m sure that will change once he figures out he can make his own decisions when we are not there! 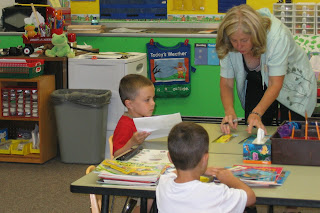 He said he had a good day at school. He said they didn’t do much coloring or painting, “We just, like, learned stuff.” He said recess was the best part of the day, and that the tricycles were ok, but the playground was “a baby playground.” They have music on Mon & Wed, PE on Tues and Thurs and go to the library on Wednesdays. He sat next to a girl named Addison on the bus ride home. 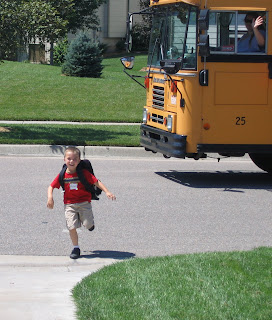 Zach was unusually quiet this morning. We went on a bike ride to the neighborhood playground, played “Guess Who,” and colored with markers. He does not start preschool until Sept. 3. 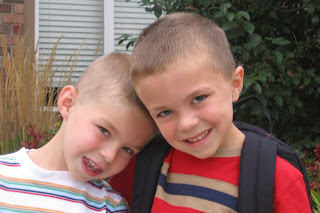 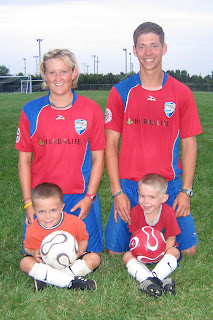 On Saturday we said goodbye to our new friends from England, Adam and Lindsay. They were soccer coaches who stayed with us all week while they conducted a youth soccer camp. Adam and Zach latched on to them pretty quickly and by the second day were going into their rooms in the morning to wake them up. It was a little confusing at first having two boys named “Adam” in the house, and a couple of times when I was calling (ok, yelling) for my child Adam, Adam the coach would answer. So we decided that we would call him “Coach Adam.” The funniest time was when Zach didn’t have any clean pajamas so I told him to go get some of Adam’s. Coach Adam was walking by and said, “They’ll be a bit big, don’t you think?” He knew what I meant but we still had a laugh. Coach Adam and Lindsay talked with an accent and the boys said sometimes they didn’t understand what they were saying.

They said they really like Wichita (despite the two 105 degree days we had). They made it to the Sedgwick County Zoo, Towne West (probably not the best shopping option in Wichita) and our neighborhood pool. Scott took them to lunch one day, and they passed an IHOP (International House of Pancakes), and said they had always heard about them, but had never eaten there. So that’s where they ate lunch. Adam asked Lindsay if she had any kids. Lindsay is only 19, so she said she was a little young for that. Later Adam said to me “Mom, Lindsay is WAY younger than you.”

Scott grilled steaks one night, which they seemed to enjoy. New foods they tried at our house were scrambled eggs, cinnamon toast, burritos and peanut butter. We had a conversation about the word “chips” and what it means in each country. Chips in America are called “crisps” in England. A “chip” in England are steak fries in America. We found out that iPod’s cost about $200 less in the US than Great Britain. The only word I had a hard time understanding was “garage.” Lindsay pronounced it “gare-age.” And I think they called the soccer field, the “pitch.” They were great with the kids at the camp and on the last day they had a huge water fight…campers against coaches. Adam and Zach had a blast running around squirting them with their water guns.
Posted by Susan at 8:56 PM 1 comment: