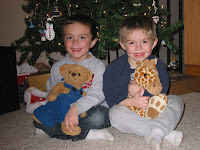 The holiday season is in full swing...the tree is up, the lights are outside and the cookies have been baked. We saw Santa at the mall (but no one wanted to stop and say hello) and bought gifts for the Angel Tree. We've even discussed how Santa knows you are asleep...magic, of course. Adam thought maybe he shined a flashlight through the window into your room. Zach's continued fascination with our singing/dancing/annoying snowman singing "Holly Jolly Christmas" just adds to the holiday spirit. And I heard Adam tell Zach "if you keep doing that you're going to get coal in your stocking!"
We've added a new favorite game to our list...monopoly. Not jr. monopoly, regular adult (for ages 8+ is says on the box) monopoly. Two nights last week we played for an hour and a half (that took some patience on my part). We all made it around the board twice. It is actually a great learning game (counting the dots on the dice, identifying letters and numbers on the deeds, and counting money). Scott and I were very surprised it held their attention that long. Adam even got sent to jail! What excitement! It was better than Candy Land, which I can only take in small doses.
Last weekend we went to a glass studio (what were we thinking???) and designed an ornament and then got to watch them make it. But the best part was there was a front end loader in the back where they were blowing the glass. We had to go check it out, which according to Adam and Zach, was much more thrilling than seeing a glass ornament being made.
Posted by Susan at 10:08 PM 1 comment: