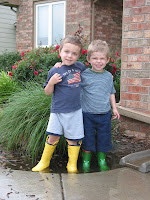 I know I already posted a "rainy day" picture last month, but it's been raining for about a week here! We got some hand-me-down rain boots and now Adam and Zach thinks it's neat to where them outside, even though both pairs of boots are about 2 sizes too big.

We've been stuck inside so we've passed the time playing CandyLand, Memory and Hungry, Hungry Hippos, "cars on the road," trains, "soccer-bowling" (a sport that is sure to catch on nationally) as well as painting, coloring and play dough. There has also been an incident of someone writing on the wall. The culprit wrote "Zach" in Zach's bedroom, but he's insisted he is innocent. The same day, the ceiling fan mysteriously got broken, although it's hard to hide the fact that the boys were throwing their stuffed animals up there while it was on.

Some of you have heard this, but it's still funny (at least I think so). Adam asked me "how long ago were you 4 years old, like me? Was it 50 years ago?" I told him it wasn't quite that long ago, and he asked "was it the olden days? Were there Indians?" I said it was a long time ago and we have things now that we didn't have 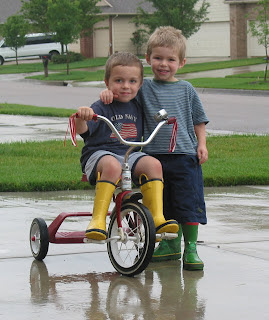 then, like computers. He asked "if you didn't have computers, how did you send e-mails?" I said that you either called someone of the phone, went over to their house, or wrote them a letter. He wanted to know what "wrote them a letter" meant. And then when I told him, he furrowed his brow like he didn't quite understand.

Adam also asked where Papa (my dad) works. And I told him he works on TV, and Adam said "I thought he worked at Starbucks. He's there all time." And for those of you who know my dad, this is true...some days there are multiple coffee runs to Starbucks.

We moved Zach to a "big boy" bed (twin) because my sister needed her toddler bed back. He's been sleeping on the floor for months (don't ask) and when he got under the covers he said, "My feet aren't sticking out!" (because when he slept on the floor, his feet stuck out from under the small blanket he wanted to be covered up with!). Maybe now he'll like his new bed so much, that he will actually sleep in it (or better yet, stay in it when it's bedtime).
Hopefully next time I can post some "sunny" pictures!
Posted by Susan at 10:40 PM 1 comment: 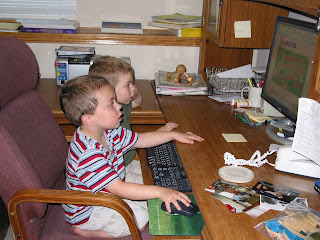 This techno-savvy generation of preschoolers amaze me. Last night Adam asked if he could show Zach how to play play computer games. I was wary about it, but said yes anyway. So we start up the internet and Adam directs me to the correct site. "Go to that button and then to click on THAT one," he said as I pulled down our saved bookmarks. The he said that he could do it now...so he and Zach sat in the chair together and found the list of games, clicked the mouse on the right one and started playing. He even knew how to go to the side scroll bars, hold the button the mouse and scroll down to see more! So, I left the room, and heard them playing in there for a while. Then I heard them talking about playing a different game, and I thought they would call me back in to set it up. Nope. They had gone back to the list of games, found the one they wanted and got it started. How do they learn this stuff?
We spent the weekend in KC, had a cookout and took in a very uneventful and short Royals baseball game. When we got home Sunday, the first thing Adam wanted to do was hit some balls in the backyard. Zach's plans were to get completely sandy and dirty in the sandbox.
We started swimming lessons last week. They are the only two in the class. By the end of the first class they were both going all the way under water! Scott and I watched from the sidelines.